The Buffalo Dance, of course, revolves around the buffalo, more correctly known as the American Bison. The buffalo is a symbol of abundance.

Historically, Pueblo Peoples crossed the mountains to the north to hunt or trade for buffalo and bring back meat for the long winter. 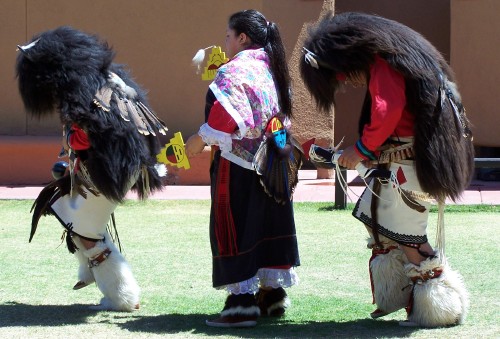 Like all Animal Dances, the Buffalo Dance is a celebration of thanksgiving. The hunter takes on the spirit of the buffalo he has hunted during the year. He thanks the spirit of that animal, and he asks for good luck for next year’s hunting.

To be asked to dance in the Buffalo Dance is a great honor.

Keep in mind that it is also an honor to be able to attend a Pueblo Dance. The Dances are spiritual celebrations, so please treat these celebrations as though they were taking place in your own house of worship. Also ask at each individual pueblo for any special rules. Most do not allow the use of cameras during sacred dances, for example.

A kilt is worn during Buffalo Dances at the Pueblos. These dances are performed in winter. While the number of dancers, their outfits and the dance is different in each Pueblo, Buffalo Dances at every Pueblo are prayers for snow and good hunting.

The Buffalo Dance, or Bison Dance, is also an annual dance festival of many North American Plains Indians, including the Mandan (now part of the Three Affiliated Tribes), Sioux, Cheyenne, Pawnee, and Omaha, among others. The festival traditionally coincided with the return of the buffalo herds, and included a feast and a dance with a number of men wearing buffalo and other animal skins

As the buffalo, or bison, was so central to society, it was important to assure the return of the herd and an abundance of food and resources.

The Buffalo Dance can also refer to a section of larger ceremonies and dances, such as the Sun Dance. In some societies it was also a dance more associated with curing the ill, calling on the spirit of the buffalo.