Bryan Akipa, a member of the Sisseton Wahpeton Dakota Nation, is a self-taught flute maker, flute player and traditional woodcarver. 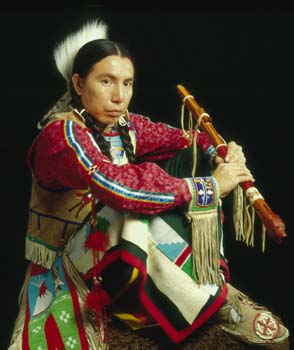 As a young man, he attended the Institute of American Indian Arts and studied fine arts with Oscar Howe at the University of South Dakota. After graduation, Bryan taught elementary school for seven years.

Since 1991, he has committed himself to his chosen art and craft, the cedar flute. In addition to being a premier Native American flute player, Bryan is internationally known for his craftsmanship of traditional flutes.

While he says that his knowledge of the flute is primarily self-taught, he also acknowledges the elders, relatives and friends that took the time to teach him about the flute. When one hears the depth and the age in the sound of his instruments, the importance of this tradition becomes quite apparent.

Bryan feels the experience of making his own flutes and learning the old songs has been nothing but a good blessing. His music, however, is made up of the old and the new, and he takes great pride in skillfully blending the traditional and contemporary.

According to Akipa, “The flute can be very relaxing and soothing. In olden times it was the music for lovers. The essence of wind, the melody of a red cedar flute, where it comes from and where it goes is a mystery. So is everyone born of the spirit of love.”

Bryan Akipa has also contributed on these albums and one children’s book: