A week after Pope John Paul II was buried in the Vatican, the Blackfeet Nation laid to rest one of its most revered spiritual leaders here Thursday. 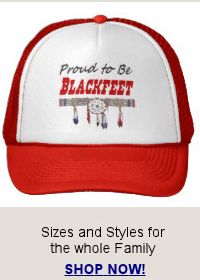 A standing-room-only crowd jammed the gymnasium of the Blackfeet Middle School to honor George Kicking Woman, 92, who held the sacred Thunder Pipe medicine bundle for 54 years until his death April 7. Praying over it and opening it each spring in an elaborate ceremony would bring blessings to his tribe, Kicking Woman told the Tribune five years ago.

“In Blackfeet territory, George’s passing is equivalent to the death of the pope,” said Jerry Potts of the North Piegan Tribe in Canada. “George was keeper of his tribes songs and ceremonies.

“George and (his wife) Mollie were inspirational to me,” added Potts, himself the holder of a medicine bundle. “George would help anyone. He cared for everyone.” 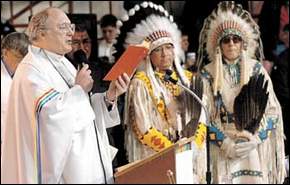 During the ceremony, Kicking Woman’s open casket stood under a basketball backboard, its net having been replaced by a large photo of him in traditional regalia. A performance by Indian drummers preceded a Catholic Mass.

The Rev. Ed Kohler remembered a discussion he had with Kicking Women when he first got to Browning in 1983. They were standing in Kicking Woman’s front yard discussing their mutual faith, he said.

“It was in May, a bright cloudless day, without even a breeze,” he said. “He had been telling me about a ceremony that he did with thunder, and as he concluded, there was a huge clap of thunder out of nowhere.

“We both looked at each other, and George said, ‘God has blessed our conversation.’ That event had a great impact on me,” Kohler said.

Similarly, Darrell Norman, owner of Browning’s Lodgepole Gallery, remembered Kicking Woman providing the inspiration for the design on his tepee, then helping him paint it on with sticks, the old-fashioned way.

“We were just finishing painting the last crow,” he said. “And suddenly, out of nowhere, there was a huge clap of thunder. I jumped and looked at George, and he said, ‘Now you’ll always remember painting this tepee.’ “

Nearly everyone in the gym had some memory of Kicking Woman to share.

“One of his most important teachings was that before you can understand all of life, you have to understand yourself,” said Wilton Goodstriker of Cardston, Alberta. “And to find that person, you have to seek out the old people, because they are the ones closest to life, the ones who know the secrets of life.”

Carol Murray, a professor at the Blackfeet Community College, remembered Kicking Woman guiding friends through the Sweetgrass Hills and explaining their religious significance.

Phil Jones of Marion, a descendent of French fur trappers who traded with the Blackfeet a century before, said he and his wife, Connie, had joined George and Mollie Kicking Woman in opening their Thunder Pipe bundle for the past two dozen years.

“George and Mollie were both healing people,” he said. “They never took credit, but we witnessed some tremendous examples of their healing power over the years.”

“Mollie taught me the importance of caring for others, helping others and healing others,” added Connie Jones.

“There’s power in that (Thunder) Pipe, power that channeled through to them,” she said Thursday. “My mom could heal people, and several supernatural things happened to my dad. One person saw my dad’s face on an otter. Several others saw his face in the clouds. They were mystical people.”

“When I took my drum group around, I always came to George for prayers and advice,” said Maynard Kicking Woman, a cousin. “We adopted him as a grandfather.”

“He’s always been there for my family,” said Armand Edwards. “I looked on him as my grandfather. I used to drive him around the reservation – he loved to take cruises – and it was an honor for me to be with him. He was an elder, and I learned a lot from him.”

“George and Mollie were the spiritual leaders in our family,” said Robert Mad Plume, a school board member. “They played a tremendous part in our community. George was one of the most important t spiritual leaders I’ve known in my lifetime.”

Juanita Sloss, a teacher at the Napi Elementary School, told of breaking the news of Kicking Woman’s death to the children.

“One of the kids asked me, ‘Was he the first Blackfeet?’ and I suppose, in a way, he was,” Sloss said.

“We looked up to George and Mollie for a long time, and he helped our family a lot,” said Johnny Tailfeathers. “When we were in trouble, he helped us up and prayed us up.”

Before leading his band in a version of one of Kicking Woman’s favorite songs, “This Old Rugged Cross,” Herman Whitegrass remembered Kicking Woman as a tremendous athlete in his prime and a tremendous fan after his playing years were over.

“I was always proud to see George lead our basketball team,” he said. “He was very involved with sports, with boxing and basketball and track. We’ll all miss him.”

Laughter also was a part of their household, remembered Norman.

“We were driving back from a ceremony in Canada with George, and he was saying what a terrible thing it was with all this sex and kissing on television. He was saying they never did that. His woman would put her hands out, palm up, and he would cover her hands with his,” said Norman.

“And from the back seat, his daughter Doris said, ‘So that’s where nine of us kids came from? Just holding hands?’ “

“He was a remarkable human being,” Horse Capture said. “There are a few left who still live that lifestyle, but not many.”