Benjamin Harjo Jr. (born 1945) is an award-winning painter and printmaker from Oklahoma. Harjo is half-Seminole and half-Shawnee and is enrolled in the Absentee Shawnee Tribe of Oklahoma. 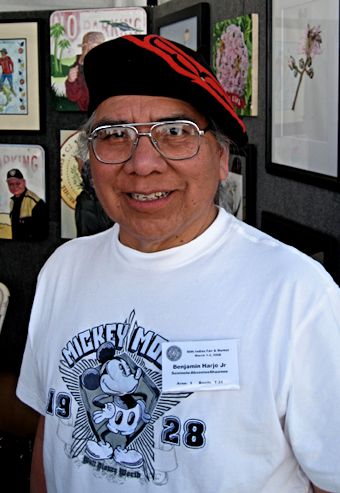 Harjo is as recognizable as his art. If you are searching for him at an
art opening, look for the handsome, well-dressed Native American,
wearing a smile and a jaunty beret. You’ve found Ben Harjo Jr.
Public Domain Photo by Uyvsdi, via Wikimedia Commons


The name Harjo means “Crazy” in the Muscogee language and is part of a military title, Chitto Harjo, meaning “Crazy snake.”

Benjamin Harjo, Jr. was born on September 19, 1945 in Clovis, New Mexico. The family moved back to Oklahoma, and Harjo lived with his grandparents, Emmett and Ruth Wood,  two brothers and three cousins from age 10 to 18 on their family farm in Byng, near the South Canadian River.

Benjamin Harjo now lives in Oklahoma City with his wife, Barbara, a curator and gardener.

A major turning point in Harjo’s career was his marriage to Barbara Isaac, September 25, 1982. She determined, early in their marriage, she would manage his career, making it possible for him to devote full time to his art.

Harjo’s first passion was cartooning, and he sold comics to his high school newspaper. Interested in pursuing a professional career in cartoon animation, Harjo went to the Institute of American Indian Arts in 1966, only to discover that their animation program no longer existed.

He stayed at IAIA anyway and earned his Associate of Arts degree. His classmates included such luminaries as T. C. Cannon and Linda Lomahaftewa. Seymour Tubis was his most influential teacher, who taught him low-tech but highly effective printmaking techniques.

Upon his release from the military, Harjo continuing his art education and attended Oklahoma State University and graduated with a BFA degree in 1974. He took on a variety of art-related jobs and continued to paint. His reputation grew, and eventually he became a full-time artist.

Benjamin Harjo Jr. has often been called “The Picasso of Indian Art.” Study his colorful, geometric-inspired paintings and it’s easy to see why that phrase is such a perfect description of his work.

His vivid, primary colors sparkle on the canvas and the unusual circles, lines and triangles that inform his paintings give viewers a distinctive definition of contemporary American Indian art.

Diversity is the hallmark of his painting techniques and styles. Some work resembles intricate mosaics, perhaps inspired by traditional Seminole patchwork clothing. His pen and ink sketches reveal the influence of the cartoons he loved as a youth. Printmaking provides an avenue for Harjo to play with texture and subtler palettes. Humor is seen through his witty imagery or in clever titles he creates.

A vairety of two-dimensional media express Ben’s particular visions. He works in goache on watercolor paper, conte crayon, pen and ink, and especially, woodcut. The bold color of his work is closely contained and formally ordered within his free compositions.

He uses geometric patterns, often incorporating hands and faces into his pictures. His imagery contains clear echoes of Seminole, Navajo, Plains Indian, and Northwest Coast designs, but also frequently references international themes and art forms. Along side his full-size pieces, Ben has a tradition of creating miniature works along with his full-size pieces.

Harjo typically paints geometric forms composed of blocks of highly saturated color that form both abstract and highly stylized representational figures. The mosaic nature of his painting is reminiscent of traditional Seminole patchwork clothing. He also works in pen and ink, allowing his comic influences to show through. Through printmaking, Harjo is able to experiment with texture and subtler palettes. His work is known for its humor, either in comical imagery or in witty titles.

Of his often interpreted work, Harjo says, “I do legends and stories, or I make up my own after the painting is done. Sometimes people find images in my painting that I didn’t put there. I wonder, how did they get there?”

“When you’re traveling down the highway, you see an image whether it’s dirt on the back of a truck or a splat on a windshield or two birds sitting by the side of the road picking at something. All those things have inspired me at some point in my creativity.”

I”t has always been my contention that one’s art speaks from the soul of the artist and remains viable and open to the influences of the artist’s environment. Forms, colors, and movement keep it from stagnating and allow it to grow as the artist matures and develops. I feel that my art covers a wide range of emotions, from serious to humorous, and that the colors I used radiate a sense of happiness and joy.”

Early in his career, viewers were excited by his brilliant colors, which played off each other, and the story-telling quality of his art.

Now considered one of the nation’s leading Native American artists, the work of Benjamin Harjo, Jr. has been featured in numerous regional and national publications including Art of the West, Oklahoma Today, Southwest Art Magazine, American Indian Art, and Indian Market Magazine.

Harjo’s paintings and graphics have been privately collected throughout the U.S. and abroad and featured in public collections such as the Fred E. Brown Collection at the Oklahoma Museum of Natural History and the Red Earth Center, both located in Oklahoma. Abroad, his work has been displayed in France, Japan, Korea and Somalia.

Oklahoma Governor David Walters honored Harjo for his selection by Absolut Vodka to represent Oklahoma in its USA Today advertising campaign. In 1992, Harjo showed his work at the Franco-American Institute in Rennes, France.

In 1991, the Wichita Art Museum held a solo exhibition of his work, and the Wheelwright Museum of the American Indian hosted a major retrospective of Harjo’s work, entitled “The Earth, the Moon, and the Stars Above.” At a January 2010 solo exhibition at his alma mater, the Oklahoma State University, Harjo donated all proceeds of his art sales to OSU’s Art Department.

His artwork can be found in the many public collections, including at: