The Aztec Calendar is perhaps the most famous symbol of Mexico, besides its flag.

The original object is a 12′, massive stone slab, carved in the middle of the 15th century. Many renditions of it exist and have existed through the years and throughout Mexico.

Historically, the Aztec name for the huge basaltic monolith is Cuauhxicalli Eagle Bowl, but it is universally known as the Aztec Calendar or Sun Stone. It was during the reign of the 6th Aztec monarch in 1479 that this stone was carved and dedicated to the principal Aztec deity: the sun. The stone has both mythological and astronomical significance. It weighs almost 25 tons, has a diameter of just under 12 feet, and a thickness of 3 feet. 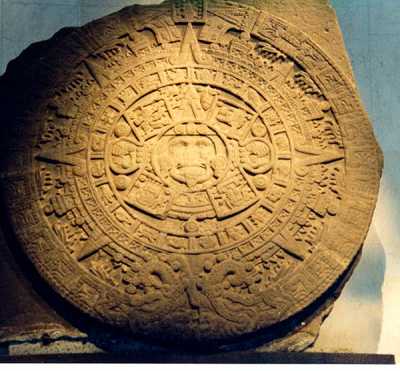 On December 17th, 1760 the stone was discovered, buried in the “Zocalo” (the main square) of Mexico City. The viceroy of New Spain at the time was don Joaquin de Monserrat, Marquis of Cruillas. Afterwards it was embedded in the wall of the Western tower of the metropolitan Cathedral, where it remained until 1885. At that time it was transferred to the national Museum of Archaeology and History by order of the then President of the Republic, General Porfirio Diaz.

The tonalpohualliwas the ‘counting of days.’ It originated by ancient peoples observing that the sun, crossed a certain zenith point near the Mayan city of Copan, every 260 days. So this first system is arranged in a 260-day cycle. These 260 days were then broken up into 20 periods, with each period containing 13 days, called trecenas.

Each period was given the name of something that was then shown by a hieroglyphic sign, and each trecena was given a number 1-13. Each trecena is also thought to have a god or deity presiding over each of the trecena. They kept these counts in tonalamatls, screenfold books made from bark paper.

The Aztecs used this as a religious calendar. Priests used the calendar to determine luck days for such activities as sowing crops, building houses, and going to war.

The xiuhpohualli was the ‘counting of the years.’ This calendar was kept on a 365-day solar count. This was also the agricultural and ceremonial calendar of the Aztec state. It was divided into 18 periods, with each period containing 20 days, called veintenas. This left five days that were not represented. These were called “nemontemi.” These were the five transition days between the old and the new year, and were considered days of nothing. This was a time of festivals. People came to the festivals with their best clothes on, and took part in singing and dancing. This is also when the priest would perform sacrifices, most of these sacrifices were human, but others were preformed on animals and fruit.

The solar year was the basis for the civil calendar by which the Mexicas (Aztecs) determined the myriad ceremonies and rituals linked to agricultural cycles. The calendar was made up of 18 months, each lasting 20 days. The months were divided into four five-day weeks. The year was rounded out to 365 days by the addition of the five-day nemontemi (empty days), an ominous period marked by the cessation of normal activities and general abstinence. The correlation of dates in the Gregorian calendar is uncertain, although most authors on the subject affix the beginning of the Aztec year to early February. A variety of sources were consulted in developing the following chart of some of the ritualistic activities associated with each month.

Many of the Aztecs’ religious ceremonies, including frequent human sacrifices, were performed at the Great Temple, located in the center of their capital city of Tenochtitlan.

Every 52 years the tonalpohualli and the xiuhpohualli calendars would align. This marked what was known as a Mesoamerican “century.” Every one of these centuries was marked by xiuhmolpilli – Binding Up of the Years or the New Fire Ceremony.

This was a festival that lasted 12 days and included fasting as a symbol of penitence. At the beginning of this festival all the lights in the city were extinguished – people let their hearth fires go out.

Then on midnight of the 12th day of the festival, a prisoner was taken to the priest. The priest would watch in the night sky for the star of fire to reach the zenith. Once it did, the priest would remove the heart of this man, and replace it with a piece of wood, that was laid on a piece of turquoise. This is where the priest would start the new fire that would once again light the city.

The tonalpohualli (count of days) was the sacred almanac of the Mexicas. This ritual calendar was registered in the tonalamatl (book of days), a green-fold bark paper or deerskin codex from which a priest (called tonalpouque) cast horoscopes and predicated favorable and unfavorable days of the cycle. The almanac year comprised of 260 days, each of which was assigned a date by intermeshing one of 20 day-signs, represented graphically with a glyph, and a number from 1 to13, represented by dots so that no two days in the cycle could be confused.

The almanac year was thus made up of 20 13-day weeks, with the first week beginning on 1-Crocodile and ending on 13-Reed, the second week running from 1-Ocelot to 13-Deaths’ Head and so on. A god or goddess was believed to preside over each day-sign.