The Arapahos and Cheyennes both belong to the great Algonquian family, and, for a long period, were closely associated. The Arapahos led the migration from the Algonquian body in the far North. The Cheyennes brought up the rear. They came from what is now Minnesota. Whether they were in league at the time or whether they formed an alliance later is unclear. 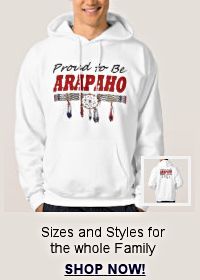 Dunbar was of the opinion that the name Arapaho came from the Pawnee word tirapihu (or carapihu), meaning trader. The Sioux and Cheyennes called the Arapahos “Blue-Sky” men, and “Cloud-men.” The import of these appellations is not now known. The Arapahos called themselves Inunaina. The Arapaho clan system has been lost.

In the tribe there are five principal divisions:

The Arapaho recognize among themselves five main divisions, each speaking a different dialect and apparently representing as many originally distinct but cognate tribes.

(1) Nákasine’na, Báachinena, or Northern Arapaho. Nakasinena, meaning `sagebrush men,’ is the name used by themselves. Baachinena, meaning `red willow men (?),’ is the name by which they were commonly known to the rest of the tribe. The Kiowa distinguished them as Tägyäko, meaning `sagebrush people,’ a translation of their proper name. The Northern Arapaho keep the sacred tribal articles, and are considered the nucleus or mother tribe of the Arapaho, being indicated in the sign language by the sign for “mother people.”

(3) Aä’ninena, Hitúnena, Atsina, or Gros Ventres of the Prairie. The first name, said to mean `white clay people,’ is that by which they call themselves. Hitúnena, or Hittiuenina, ‘begging men,’ `beggars,’ or more exactly ‘spongers,” is the name by which they are called by the other Arapaho. The same idea is intended to be conveyed by the tribal sign, which has commonly been interpreted as `big bellies,’ which is where the name Gros Ventres applied to them by the French Canadians comes from.

In this way they have been by some writers confused with the Hidatsa, who are the Gros Ventres of the Missouri.

(4) Bäsawunena, meaning ‘ wood-lodge people,’ or, possibly, ‘ big lodge people.’ These, according to tradition, were formerly a distinct tribe and at war with the Arapaho, but have been incorporated for at least 150 years. Their dialect is said to have differed considerably from the other Arapaho dialects. There are still about 50 of this lineage among the Northern Arapaho, and perhaps a few with the other two main divisions.

(5) Hánahawuuena, meaning `rock men’ or Aanû’nhawa. These, like the Bäsawunena, lived with the Northern Arapaho, but are now practically extinct.

The two main divisions, Northern and Southern, are subdivided into several local bands, as follows: