Who is the Apache Tribe?

Also known as the Plains Apache, there are many Apache tribes. The Apache Tribe of Oklahoma consider themselves as having always been a distinct linguistic and cultural group. They are descendants of Athabascan-speaking Apache groups who have inhabited the Plains since the 15th century and are members of the Eastern Apache branch which includes the Lipan, Jicarilla and Mescalero Apache tribes.

The Anglo theory is the Apache Indian migrated to the Southwest from Northern Canada in the 1500’s. The Apache indian history says it was the other way around, that most of the Athapaskan speaking people migrated to the North and a few stayed in their homeland. In any event, it is generally agreed that about 5,000 Apaches lived in the Southwest at the end of the 1600’s. The Apache people say they were always there. 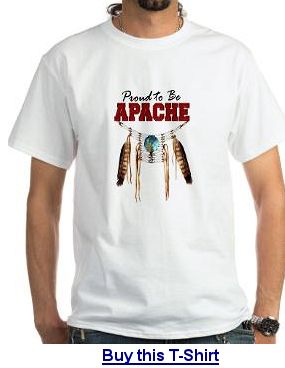 Most Apaches prefer to call themselves Inde, their autonym, meaning “Apache, person” in the language of the Mescalero Apaches. Known historically as the Ka-ta-kas,

The word Apache entered English via Spanish, but the ultimate origin is uncertain.

The first known written record in Spanish is by Juan de Oñate in 1598. The most widely accepted origin theory suggests Apache was borrowed and transliterated from the Zuni word a·paču meaning “Navajos” (the plural of paču “Navajo”).

The Spanish first used the term “Apachu de Nabajo” (Navajo) in the 1620s, referring to people in the Chama region east of the San Juan River. By the 1640s, they applied the term to southern Athabaskan peoples from the Chama on the east to the San Juan on the west.

Another theory suggests the term comes from Yavapai ačə meaning “enemy”. The Zuni and Yavapai sources are less certain because Oñate used the term before he had encountered any Zuni or Yavapai. A less likely origin may be from the Spanish word mapache, meaning “raccoon.”

Other sources say the word “apache” comes from the Yuma word for “fighting-men” and from the Zuni word meaning “enemy.”

The fame of the tribes’ tenacity and fighting skills, probably bolstered by dime novels, was widely known among Europeans. In early 20th century Parisian society, the word Apache was adopted into French, essentially meaning an outlaw.

During the mid-19th century, the United States federal government made a number of treaties with the Southern Plains tribes. In 1865, the unratified Treaty of the Little Arkansas assigned the Kiowa Apache, Cheyenne, and Arapaho to a common reservation. However, settlers continued to pour into tribal lands, with the Medicine Lodge Treaty of 1867 further reducing the tribal domain. Reservation lands were opened for allotment during the late 19th century, with most of their lands passing into non-Indian hands.

Land Area: The Apache Tribe of Oklahoma jointly owns 7,592.61 acres of federal trust land in Caddo County with the Kiowa and Comanche Tribes. The 1867 Medicine Lodge Treaty established a reservation in the southwestern corner of Indian Territory for the Kiowa Apache, Arapaho, Cheyenne, and Comanche. Allotment severely diminished the reservation during the early 20th century. Today, 274,312.53 allotted acres supplement the joint tribal land base.

The Apache Tribe of Oklahoma is a federally recognized tribe. They have established tribal governments under the Indian Reorganization Act of 1934 (25 U.S.C. 461-279), also known as the Wheeler-Howard Act, and they successfully withstood attempts by the U.S. government to implement its policy during the 1950s of terminating Indian tribes.

They were granted U.S. citizenship under the Indian Citizenship Act of 1924. They did not legally acquire the right to practice their Native religion until the passage of the American Indian Religious Freedom Act of 1978 (42 U.S.C. 1996).

The Wheeler-Howard Act, however, while allowing some measure of self-determination in their affairs, has caused problems for virtually every Indian nation in the United States, and the Apaches are no exception. The act subverts traditional Native forms of government and imposes upon Native people an alien system, which is something of a mix of American corporate and governmental structures.

Invariably, the most traditional people in each tribe have had little to say about their own affairs, as the most heavily acculturated and educated mixed-blood factions have dominated tribal affairs in these foreign imposed systems.

Frequently these tribal governments have been little more than convenient shams to facilitate access to tribal mineral and timber resources in arrangements that benefit everyone but the Native people, whose resources are exploited. The situations and experiences differ markedly from tribe to tribe in this regard, but it is a problem that is, in some measure, shared by all.

The Apache Tribe of Oklahoma incorporated in 1972, adopting a constitution and bylaws in accordance with the Indian Reorganization Act of 1934 and the Oklahoma Indian Welfare Act of 1936.

The Apache and Navajo tribal groups of the North American Southwest speak related languages of the Athabaskan language family. Other Athabaskan-speaking people in North America reside in a northern range from Alaska through west-central Canada, and some groups are found along the Northwest Pacific Coast. Linguistic similarities indicate the Navajo and Apache were once a single ethnic group.

Archaeological and historical evidence seems to suggest the Southern Athabaskan entry into the American Southwest was sometime after 1000 AD. Their nomadic way of life complicates accurate dating, primarily because they constructed less-substantial dwellings than other Southwestern groups.

Origins of the Apache Indians

For the Apaches, the family is the primary unit of political and cultural life. Apaches have never been a unified nation politically, and individual Apache tribes, until very recently, have never had a centralized government, traditional or otherwise.

Extended family groups acted entirely independently of one another. At intervals during the year a number of these family groups, related by dialect, custom, inter-marriage, and geographical proximity, might come together, as conditions and circumstances might warrant.

In the aggregate, these groups might be identifiable as a tribal division, but they almost never acted together as a tribal division or as a nation—not even when faced with the overwhelming threat of the Comanche migration into their Southern Plains territory.

The existence of these many different, independent, extended family groups of Apaches made it impossible for the Spanish, the Mexicans, or the Americans to treat with the Apache Nation as a whole. Each individual group had to be treated with separately, an undertaking that proved difficult for each colonizer who attempted to establish authority within the Apache homeland.

The plains Apache traded buffalo meat and hides to the Pueblos of the Rio Grande Valley in exchange for corn, beans, cotton blankets, turquoise and ceramics.

Because of their alliance with the more numerous Kiowa Tribe, the Plains Apache were known historically as the Kiowa Apache.

Apache ceremonies are invariably called “dances.” Among these are the rain dance, a puberty rite called the sunrise dance for young women, a harvest and good crop dance, and a spirit dance. Members maintain the ceremonial focus of tribal identity today through the Blackfeet Dance, and children are introduced into Apache society through the receiving of an Apache name and the performance of the Rabbit Dance.

The arrival of the horse around 1680 transformed the Apache into highly mobile hunters and raiders.

At the time of contact, the primitive dress of the apache men was a deerskin shirt, leggings, and moccasins. They were never without a loin-cloth. A deerskin cap with attractive symbolic ornamentation was sometimes worn. The apache woman’s clothing consisted of a short deerskin skirt and high boot top moccasins.

In the 1800’s, many Apache men began to wear white cotton tunics and pants, which they adopted from the Mexicans, and many Apache women wore calico skirts and dresses. The Apaches wore moccasins or high moccasin boots on their feet. An Apache lady’s dress or warrior’s shirt was often fringed and beaded for decoration. 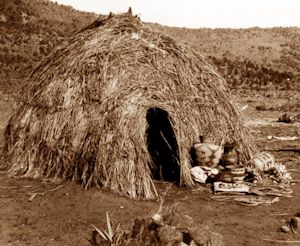 Most Apache dwellings consisted of a dome shaped frame of cottonwood or other poles, thatched with grass or brush. The house itself was termed, “Kowa” and the grass thatch, “Pi”.

According to the Ndee from the beginning Is dzán naadleeshe’, Changing Woman lived alone. One day she received inspiration to go up on a hill and build a wickiup with four poles, where the first rays of the sun would strike in the morning. Is dzán naadleeshe’ went inside and lay there and as the sun came up, the sun shone between her legs. One of his rays went into her. This caused her first menstrual period.

After that she became pregnant. She conceived a son and called him Nayé nazgháné; (Slayer of Monsters). Four days later she was impregnated by Water- Old Man and gave birth to Túbaadeschine (Born of the Water-Old Man). These were the first Apache people.

Later, after the Apache aquired the horse, some tribes who traveled great distances to hunt buffalo, adopted the tipi used by other Plains Tribes. A tipi is a wood pole frame covered with animal skins.

The Ka-ta-kas, or Plains Apache were plains hunters who followed the great southern bison herd across the grasslands of western Texas, Oklahoma and eastern New Mexico. Buffalo represented the centerpiece of Apache life, providing meat, clothing, tools, weapons and shelter.

Foods that were taboo to the Apache

Today, tribal members work in a variety of professions in the Anadarko and Fort Cobb areas, and tribal identity and tradition flourish.

The Apache are devoutly religious and pray on many occasions and in various ways. Recreated in the human form, Apache spirits are supposed to dwell in a land of peace and plenty, where there is neither disease or death. They also regarded coyotes, insects, and birds as having been human beings.

Apache religion is based on a complex mythology and features numerous deities. The sun is the greatest source of power. Culture heroes, like White-Painted Woman and her son, Child of the Water, also figure highly, as do protective mountain spirits (ga’an). The latter are represented as masked dancers (probably evidence of Pueblo influence) in certain ceremonies, such as the four-day girls’ puberty rite. (The boys’ puberty rite centered on raiding and warfare.)

Supernatural power is both the goal and the medium of most Apache ceremonialism. Shamans facilitate the acquisition of power, which can be used in the service of war, luck, rainmaking, or life-cycle events. Power could be evil as well as good, however, and witchcraft, as well as incest, was an unpardonable offense. Finally, Apaches believe that since other living things were once people, we are merely following in the footsteps of those who have gone before.

Apache women were chaste before marriage. Apache culture is matrilineal. Once married, the man went with the wife’s extended family, where she is surrounded by her relatives.

Spouse abuse is practically unknown in such a system. Should the marriage not endure, child custody quarrels are also unknown: the children remain with the wife’s extended family.

Marital harmony is encouraged by a custom forbidding the wife’s mother to speak to, or even be in the presence of, her son-in-law. No such stricture applies to the wife’s grandmother, who frequently is a powerful presence in family life.

During the 18th century, French and Spanish traders brought guns, horses and disease to the Kiowa Apache. The latter drastically reduced the tribe’s population. Reservation years brought epidemics and an assault on the Apache way of life by the Indian Service.

Culture and Customs of the Apache Indians

The Jicarilla Apache Tribe: A History

Once They Moved Like The Wind : Cochise, Geronimo, And The Apache Wars

The Lipan Apaches: People of Wind and Lightning

Portraits of “The Whiteman”: Linguistic Play and Cultural Symbols Among the Western Apache

The Apache Peoples: A History of All Bands and Tribes Through the 1880s

Drumbeats from Mescalero: Conversations with Apache Elders, Warriors, and Horseholders