Adam Beach, an Anishinaabe member of the Saulteaux tribe of Dog Creek Lake Reserve in Manitoba, Canada has starred in films ranging from Squanto to Smoke Signals to Windtalkers, as well as multiple television series such as  North of 60, Law and Order SUV and Skinwalkers, a series based on the popular Tony Hillerman novels. He is perhaps the most visible and sought-after young Native American actor working in Hollywood today. 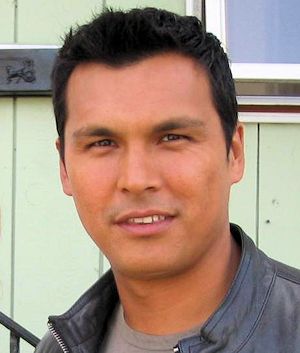 Born in 1973, he was orphaned as a child when his mother was killed by a drunk driver and his father drowned. Raised by aunts and uncles, at about age 12 he joined a gang called The Web in Winnipeg. He was its only Indian member. “I lashed out, didn’t want to be a part of anything. I’d steal clothes,” he recalls. “My friends needed jeans and I would get them.”

In 10th grade he and his friends joined a theater company, mostly to have fun, hang out together and meet girls. “I began to express myself in a safe way,” he notes. In his first film role, the 16-year-old Beach landed a spot as an extra in Graham Greene’s televised adaptation of Farley Mowat’s Lost in the Barrens. “I would rewind that one scene over and over, it was so cool!”

At age 18 came a role in a television movie, Spirit Rider. “I played an angry kid and I was good at that.” Other roles followed: the film Cadillac Girls, then the acclaimed Canadian TV series North of 60, and other TV roles.

But meanwhile, he faced a lot of skepticism about his possible career choice. Everyone said, “When are you gonna quit and get a real job?”

“I guess I could have been a carpenter or something.”

But Hollywood had other plans for Beach. Disney came calling in 1993 with the feature film Squanto: A Warrior’s Tale, in which he portrayed a young brave who is kidnapped from his village and taken to Europe. With the help of some local monks, he escapes and makes his way across the Atlantic and back to his beloved people. In 1994 came a role in the Norman Jewison film Dance Me Outside. 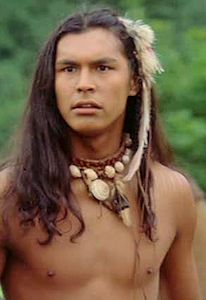 His real breakthrough role came as Victor in Chris Eyre’s Smoke Signals. It won the coveted Audience Award and the Filmmaker’s Trophy at the Sundance Film Festival in 1998, and was released by Miramax, grossing more than $6.5 million.

Notes Eyre, “The greatest thing about Adam, when he works, he’s so loose, so relaxed. He enjoys having a good time, being around people, making people laugh. I’ve done more takes with him than with any other Indian actor and I love working with him.”

Not only did Beach’s role in Smoke Signals earn him increasing respect and fame in the Native American film community, Hollywood heavyweights Terence Chang and John Woo (Face Off, MI2) took notice as well. They were then casting the $140 million MGM film Windtalkers, the story of the Navajo code talkers from World War II, and needed an Indian star. Beach got the call.

“When we shot the first big battle sequence, the whole scene is all about Ben Yahzee, Adam’s character,” relates Woo. “Through his eyes we see the war, we see all the violence. And I needed to see Adam’s true feelings. And he was shocked, because he is so innocent, he is so pure, he had never seen anything like it before. ‘Jesus Christ, it’s so violent!’ he said. ‘Yeah,’ I said. ‘This is war.'”

As much as Beach is admired by his directors, he is adored by the media. “We get Adam first and then we can all leave,” said one reporter on a recent publicity junket in which Beach was the draw. Another reporter asked for the short version of his entire life. Beach generously and calmly provided some details, from the dissolution of his marriage to his new girlfriend.

He noted, “I’m doing all right, going through some changes in life, but it’s pretty good. And I’m healthy, just trying to keep my spirits up. I’m beginning to create a better environment for myself, as opposed to hustling for other people.

“I’m taking the huge responsibility of being a role model and I want to be accountable for what I’ve got to do. And part of that is trying to gain enough knowledge and understanding of the industry—getting a little more control of it all. I’d like to venture into producing and directing, but I don’t have enough tools for that responsibility, yet. As for writing, I’m slowly getting some ideas. But actually putting them on paper is a different story.” 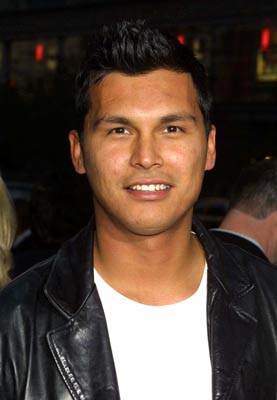 Next up, he will play the hero in a modern day Western, Chain, where the horses are Harleys and the hero is an American Indian. Beach portrays a high-plains drifter on a motorcycle, a bad boy with a heart of gold.

It is based on an original story by John Rice (who will also make his directorial debut) and is being produced by Nicolas Cage. The trailer for Chain played to an enthusiastic reception at the Cannes Film Festival this year.

It’s been a long and often difficult road from Canada to Hollywood for the talented Adam Beach. But he has arrived and in a very big way. In the years ahead we shall expect to see him fulfill many challenging, exciting and provocative roles in film and television.