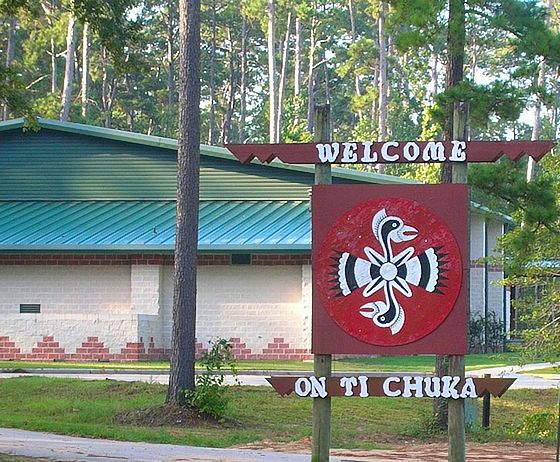 The Alabamas were once part of the Moundville chiefdom located in western Alabama and eastern Mississippi, whereas the Coushattas were connected with the Coste chiefdom, located near Bussell Island in present-day eastern Tennessee.

The Alabama Indians were members of the Muscogee Creek Confederacy, a loose trade and military organization of autonomous towns. Their home lands were on the upper Alabama River in what is now known as the states of Alabama and eastern Mississippi. The Alabama first encountered Europeans when Hernando de Soto arrived in 1540.

The Koasati tribe originally lived in Georgia, Tennessee and Mississippi and later migrated to Alabama.  They were also part of the Creek Confederacy and closely allied with the Alabama. They were encountered by Desoto on the Tennessee River and first encountered British Europeans in the 18th century, who called them Coushatta Indians.

After a brief encounter with Spanish conquistador Hernando de Soto in the early 1540s, both tribes felt the full impact of European contact. Soto and his men devastated many towns, took slaves, and spread European diseases, for which the tribes had no immunity. Further depopulation quickly followed and left both groups vulnerable to attack from the neighboring Chickasaws to the west and the Cherokees to the north and east. Survivors scattered and began another exodus from their ancient homelands in order to escape these calamities.

In the decades after Soto’s travels, the Alabamas and Coushattas came together, as a result of migrations, in central Alabama near present-day Montgomery. By 1686, Spanish explorer Marcos Delgado noted that Alabama and Coushatta refugees had established towns and villages along protective bluffs where the Alabama, Coosa, and Tallapoosa rivers converge, just northeast of Montgomery.

The new environment afforded an abundance of game and fertile soil for their crops, and their tribal names reflected their relationship to this new land. In the Alabama language, “Alabama” means “vegetation gatherers,” and in the Coushatta language (known as Koasati), “Coushatta” means “white cane.

By 1700, the Alabamas and Coushattas had built a prosperous, tightly knit community in central Alabama. Each town was autonomous and ruled by a miko, or headman (usually referred to as a chief in the nineteenth century), a council of elders, and a war chief. Alabama and Coushatta society drew strength, stability, and cohesion through intermarriage, creating extensive kinship ties. Bound by these alliances, Alabama and Coushatta towns came to be known by Europeans as the Alabama Nation throughout most of the eighteenth century.

The Alabama Nation presented a united front when English and French explorers and then settlers eventually made their way into Alabama in the first half of the eighteenth century. The tribes’ strategic location at the river junctions proved to be a source of strength when negotiating with Europeans interested in trade. Alabama and Coushatta leaders also created flexible alliances with neighboring towns, many of them Creek, in order to promote their importance and sovereignty in central Alabama. French and British emissaries subsequently vied for the Alabama Nation’s allegiance. Like many other southeastern tribes, the Alabamas and Coushattas encouraged European rivalries by pursuing neutrality and consequently received gifts, trade, and protection from both French and English representatives seeking their favor.

Their kinship ties to the French created a difficult situation for the Alabamas and Coushattas as French control of the Southeast began to weaken, especially in the years leading to the French and Indian War. During the conflict, the Alabama Nation, like other neighboring Indian groups, tried to remain neutral in order to reap the rewards of the competition between France and Britain. Some members of both tribes actively supported the French, however, and aided the garrison at Fort Toulouse.

After the British victory, the French abandoned Fort Toulouse, resulting in a steady decline in Alabama-Coushatta control in central Alabama. By the late 1700s, the majority of Alabamas and Coushattas had migrated west to Louisiana with many of their French kinsmen. For at least two decades they prospered by farming and hunting buffalo, bear, and deer, but continuous American encroachment and increased hostilities between the two cultures forced the Alabamas and Coushattas to relocate further west and rebuild their community in present-day southeast Texas.

In 1795, the Coushatta arrived in the Big Thicket area of East Texas. In 1805, nearly 1,000 Alabama came to Tyler County’s Peach Tree Village in East Texas. The two tribes became close allies and often intermarried. By 1820, there were three main Alabama towns and three large Coushatta towns in east Texas, in the region known as the Big Thicket.

They eventually were given land along the Trinity River. By the mid-nineteenth century the two tribes again faced mounting pressure from settlers and continued to suffer depopulation and extreme hardship. They were soon overrun by European-American settlers, leaving them homeless again.

In 1853, Chief Antone of the Alabamas negotiated with Sam Houston and other Texas officials and gained a permanent title to land in east Texas. In 1854, the Alabama were given 1,280 acres (5 km2) in Polk County. The following year, 640 acres (2.6 km2), also in Polk County, were given to the Coushattas. The Coushatta claim was disputed by white settlers in 1859.

When the Coushatta lost their land claim, the Alabama invited them to live on their lands. The federal government approved a large grant to purchase additional land near the reservation in 1928. It was granted to the “Alabama and Coushatta tribes.” Since that time, the reservation has officially been known as “Alabama-Coushatta Indian Reservation.”

However, similar origin myths indicate these two tribes were connected long before encroachment by Europeans. The origin myths of both tribes focus on the interconnectedness of the tribes.

One myth states that the two tribes sprouted from either side of a cypress tree. According to their tribal folklore, the ancestors of the two groups traveled from deep beneath the Earth before reaching the surface. After much time had passed, they surfaced at the opposite ends of the tree’s roots, and once they saw the light of day, their ancestors discovered the great Alabama River. The emerging Alabamas and Coushattas established their villages in two separate bodies but often hunted together and eventually began to intermarry.

Another legend was recorded in 1857 from Se-ko-pe-chi, one of the oldest Creeks in Indian Territory. He said that the Alibamu and Koasati  tribes “sprang out of the ground between the Cohawba and Alabama Rivers.”

The symbol of the Alabama-Coushatta tribe comes from precontact Mississippian culture: two intertwined woodpeckers, now symbolic of the connection between the two tribes.

Both the Alabama and Coushatta speak languages which are part of the Apalachee-Alabama-Koasati branch of the Muskogean languages, and are mutually intelligible.

They have a visitor center that is open in the summer and a campground. The Alabama-Coushatta also have nature tours of the reservation.