The Agua Caliente Indian Reservation was founded in 1896. It is home to the federally recognized Agua Caliente band of Cahuilla Indians. 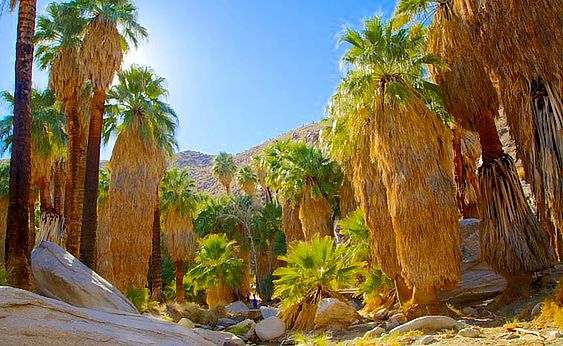 The Agua Caliente Reservation is located in Riverside County, California. The reservation encompasses 31,610 acres (127.9 km2). Since 6,700 acres (27 km2) of the reservation are within Palm Springs city limits, the tribe is the city’s largest collective landowner. The tribe owns Indian Canyons, located southwest of Palm Springs. The canyons are listed on the National Register of Historic Places. They also own land in the Santa Rosa and San Jacinto Mountains National Monument.

The Cahuilla indians live on nine reservations in southern California, linked by a shared language yet distinguished by tribal identities forged by geography, culture, and law. Their identity as Agua Caliente people is rooted in Palm, Murray, Andreas, Tahquitz, and Chino Canyons and is especially linked to the hot mineral springs, which they consider sacred lands. It is in honor of these springs, called Se-khi (boiling water) in Cahuilla (pronounced Kaw-we-ah), that they eventually became known by the Spanish term for hot water, Agua Caliente.

Agua Caliente is one of three reservations where speakers of the “Pass” dialect of the Cahuilla were located, the other two being the Morongo Indian Reservation and Augustine Indian Reservation. Pass Cahuilla is a dialect of Cahuilla found within the Cupan branch of Takic languages, part of the Uto-Aztecan language family.

A period of forced cultural assimilation followed, including taking Indian children to boarding schools where they were forbidden to speak their language.

Though revitalization efforts are underway, all dialects of Cahuilla are technically considered to be extinct as they are no longer spoken at home, and children are no longer learning them as a primary language. The last native speaker of Pass Cahuilla died in 2008.

There are several great hikes and trails and a Trading Post within the Agua Calient Indian Canyons, including the most popular Palm Canyon Trail. To get there, take Palm Canyon Drive south from downtown Palm Springs. In a few miles you’ll see the entrance to Agua Caliente Indian Reservation. There’s an entrance fee for the area – $9 each for adults and $7 each for seniors and military, and $5.00 for children (as of 2014). The reservation is open to visitors only from 8 am until 5 pm and is closed to visits from Monday to Thursday during July to September.

The highlight of the Indian Canyons is Palm Canyon, stretching 15 miles across the north slopes of the Santa Rosa Mountains. Palm Canyon is one of the great beauty spots in Western North America. Fifteen miles long, its indigenous flora and fauna, especially the abundant Washingtonia filifera (fan palm trees – there are more palm trees in this canyon than anywhere else in the world), are breathtaking contrasts to the stark, rocky gorges and barren desert lands beyond. You can drive a car about a mile into this area. Access beyond the parking lot is limited to hiking and horseback traffic. A moderately graded, paved foot path winds down into the canyon for picnicking near the stream, meditating, exploring, hiking or horseback riding. A more rugged trail extends the length of the canyon.

Fern Canyon is a minor drainage on the east side of Palm Canyon containing a small oasis of fan palms and ferns, reached by a path that starts from the main parking area at the end of the Indian Canyons access road. The full length of the trail is 4 miles

Andreas Canyon has the second most plentiful fan palm trees in the world (behind Palm Canyon) and more than 150 species of plants within a half-mile radius. A scenic foot trail leads through the canyon, passing groves of palm trees, unusual rock formations (some containing Cahuilla Rock Art) and near Andreas Creek, one can still see the bedrock mortars and metates used centuries ago for preparing food. This tranquil setting is excellent for photography, bird-watching or a picnic at one of the tables along the trail.

Tahquitz Canyon, just west of the City of Palm Springs, is noted for its magnificent waterfalls and pools. Evidence suggests it once supported a large population of Cahuilla Indians. Abundant wildlife and plant life are present throughout. There is a visitor center here, with a moderately easy two mile loop trail to the falls and a picnic area. There are many other trails in the area, with terrain varying from easy to the advanced hiker. Planning is underway to establish an Agua Caliente Cultural Museum here in the near future. There is an additional fee of $12.50 for adults and $6.00 for children (as of 2014) to enter this canyon.

The Tahquitz area is rather more commercialized than other nearby canyons, reflected in the increased price for admission. A 60 foot waterfall (seasonal) is the main attraction, together with numerous pools, smaller falls, Indian rock art and ancient irrigation ditches, though no palm trees. As of 2005, self guided hiking is once again permitted, after the canyon was closed for many years because of damage caused by previous visitors.

Murray Canyon is an easy hike south from Andreas Canyon and has the fourth most palm trees of any location on Earth. Good foot and equestrian trails lead to beautiful recreational spots among the many palm trees. Peninsula Big Horn Sheep (an endangered species), wild horses and other wild animals still roam the high ground above the canyon and can be seen by the lucky visitor. Being less visited, Murray Canyon has its own secluded beauty, and at least one known endangered species of bird, the Least Bells Vireo, nests here.

These canyons are sacred land to the Agua Caliente people and historically important to scientists. Collectively, they are known as the Indian Canyons.

The Cahuilla Indians are the original aboriginal people of this region. They traditionally occupied a diverse territory of desert, canyons, passes, and mountains with elevations ranging from 273 feet below sea level at the Salton Sink to 11,000 feet at Mount Jacinto. These traditional territories spanned an area of about 2,400 square miles. Estimates place the population between 6,000 and 10,000 prior to European contact, and archeological evidence indicates human habitation in the Palm Springs area as early as 3000 B.C, or 5,000 years ago.

This reservation comprises a little over forty-nine sections of land, or approximately 32,000 acres in three townships. The reservation was set aside for the use and occupancy of the Agua Caliente people during the administrations of President Grant in 1876 and President Hayes in 1877. It is not a contiguous reservation but a checkerboard of alternate (even numbered) sections in the cities of Palm Springs, Cathedral City, Rancho Mirage, and unincorporated Riverside County. In the 1860s, the federal government granted Southern Pacific Railroad 10 miles of odd-numbered land sections to encourage the creation of a rail line through the area, which is why the reservation contains only the even-numbered plots.