The 140th annual homecoming celebration of the Winnebago Tribe of Nebraska will be July 27 through 30 at Veterans Memorial Park on U.S. 75 east of Winnebago, Nebraska. 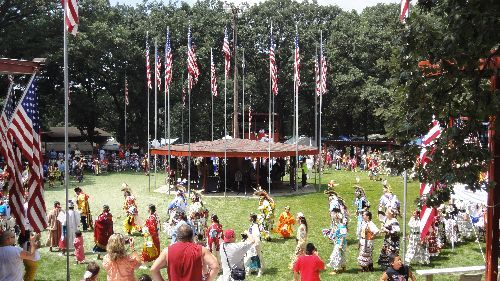 This summer’s Winnebago Pow-Wow commemorates Chief Little Priest and Company A Fort Omaha Scouts of the Winnebago Tribe of Nebraska.

Chief Little Priest was the last true war chief of the Winnebago people.

Born in Wisconsin, Little Priest became a war chief in 1844 in northeast Iowa where the tribe had been forced to move to what then was described as “neutral ground” by the U. S. government.

In 1863, the Winnebago were forced to move to South Dakota to face virtual starvation. Seeing this, Little Priest and some of his followers escaped down the Missouri to the Omaha Reservation in northeast Nebraska.

Throughout these years, Little Priest and his band fought alongside the cavalry in various battles against the Lakota and other tribes. Little Priest remarked that it hurt him deep in his heart to fight his own brothers, but he wanted to bring peace to his people, because he did not want to move again.

On Sept.12, 1866, Chief Little Priest died of wounds suffered in a battle with the Lakota. He is buried near Winnebago, Neb. Ceremonies were held to honor his death and the veterans of Company A, Omaha Scouts, Nebraska Volunteers.

This year’s homecoming celebration continues that tradition of honoring Chief Little Priest, the Company A Scouts and all veterans who have served our country.

This year, the town of Winnebago also offers visitors a unique tourism experience surrounding the Pow-Wow celebration. The Winnebago Tribe is developing Ho-Chunk Village, a new multi-use community being built on a 40-acre tract of land in Winnebago. The Ho-Chunk Village development features a blend of residential, commercial, industrial and cultural assets that are providing a brand new community for the tribe.

Visitors will have the opportunity to tour the Honoring-The-Clans Sculpture Garden featuring a unique outdoor plaza showcasing the 12 clans of the Winnebago Tribe. Within Ho-Chunk Village, AllNative.com headquarters are located, featuring an unusual array of Native American and Native themed merchandise, clothing and gifts.

A national Web and catalog retailer, AllNative.com is owned by the Winnebago Tribe. AllNative.com offers a wide selection of jewelry, art, home decor and clothing for all ages and its new expanded store is open six days a week.

The Winnebago Tribe also is involved in restoring bison to their native grasslands on the reservation. The Tribe maintains a herd just across the highway from Ho-Chunk Village.

The Winnebago Tribe maintains a new cultural museum honoring past tribal elders and the culture, traditions and history of the tribe’s struggle during the past century,

For more information on event details, call Jerome LaPointe Sr. at (402) 878-3222 or visit the Winnebago Tribe Web site at www.winnebagotribe.com